Theophina, you’re the editor in chief and founder of Onyx magazine. When and how did your magazine first come to life?

Can you tell me why you chose the name Onyx?

I wanted to name the magazine after a Black gem. This had multiple meanings to it, it spoke to the often underground route Black talent takes, as it is often marginalized by the mainstream, and so is not highly discoverable, much like gems laying underground.

It also speaks to the inherent value and beauty of Black creativity, which again is often overlooked by industries unless it is shaped to fit a certain mould, for example talking about racism and prejudice. When looking over the list of names, Onyx stood out to me because it was used as early as the Second Dynasty in Ancient Egypt, and it was used to form pottery. I loved the idea of this gem being used as a medium to create art, and this is exactly what I envisioned the magazine being, a medium that Black creatives could use to shape their voices.

What is your primary goal for Onyx? What do you wish to accomplish with it in the next few years?

My primary goal for Onyx is to platform as many Black creatives as we possibly can. To publish, commission and celebrate as many Black artists, poets, and writers as we can afford. Looking to the future, this means having the magazine become fully sustainable, and being able to pay our Black creatives. My hope is for the magazine to be a recognized platform where Black creatives can be published and have their talent acknowledged. I’m quite secretive about future plans, but in the next few years I’m definitely hoping to be able to increase the print run of Onyx (we’re currently at 1500 magazines) in order to be able to reach even more people.

What does it mean for you to have a creative space where you aren’t reduced to “the struggle” as you say on your website?

It’s liberating. So often the industry tries to put a certain barrier around the kind of stories they are interested in coming from Black people. It usually revolves around slavery and oppression, but Black creatives have so much more to offer than this, and nobody wants to be reduced to the pain enacted upon them by oppressive systems. It’s liberating to be given a place where you can express every dimension of your creativity, and to be listened to beyond your racial experiences.

Claiming your space in a world where mostly financial resources and networking are key for getting your publication onto the shelves is not an easy task. How does your team organize and get Onyx to its readers?

I’m a massive fan of genuine and authentic connection. I’m also a massive fan of starting where you are with the tools around you. With an incredible amount of hard work I managed to secure a place at Oxford University to study Philosophy and Theology. While there I saw that there was an opportunity to secure financial resources and network while also uplifting Black creatives. Claiming space looked like identifying and articulating the need for this space, and then honing in on the strategy to ensure that the idea could be brought to completion effectively. My team and I are organized into two halves. Editorial deals with the submissions, the articles, working with writers and all elements to do with the content for inside the magazine. My Non-Editorial team deals with the logistics, talking to places that can stock us, securing funding, organizing magazine events where we can sell the magazine at and other opportunities. Together we identified our biggest consumer base (students) and then decided to start at universities.

We organize around university requests for purchases of our magazine and hope to reach even more students this way.

What do you feel most proud of regarding Onyx?

When we get emails from people we’ve never met who tell us what the magazine means to them.Whether they’ve seen it around their college, in a library, on a coffee table or before they went for an interview at Oxford. I sometimes forget that over two thousand physical copies of the magazine currently exist both across the UK and internationally, and that makes me feel incredibly proud and excited.

In May 2019 you were invited to 10 Downing Street and The Houses of Parliament to give a consultation on diversity within the creative industry. Can you tell me how that experience was for you? Did you feel your voice was heard?

I was so nervous! I had never been behind that door before, but had seen it so many times in the news. I did feel like my voice was heard with the issues I raised on increasing access and representation of Black creatives within the industry, however exactly how that information will be absorbed is something that I am still keeping tabs on. It is one thing to be heard, and another to have that opinion enacted which shows that you have truly been listened to.

What is your wish for the future for Black people in Journalism?

Sustainability. It’s great that all of these initiatives and schemes are being set up to platform Black creatives, but it’s all incredibly shaky unless they actually stay in place and grow.

This looks like long-term support from people both within the industry and outside of it. I’d like more support to be given through subscriptions to Black publications which aid with long-term running costs. An example of this has been Onyx’s push to have more people become patrons. Patrons receive merchandise and the magazine for as little as 2,50 Pounds a month but this is the difference between sustainability and having to worry about whether we would be able to even make a magazine the following year. Other Black journalism platforms such as Black Ballad and gal-dem are also following this model, and I think it is the only real way to spark sustainable change. 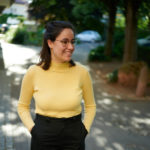